The U14 boys continued their winning ways last Wednesday evening in Tullamore when they added the PST Midland League title to their recent Leinster League crown following a fine performance against a determined Mullingar side. Both sides had faced off in the recent Leinster League final played in Mullingar where Birr overcame the local side in a thrilling final by 22 points to 12. It was widely anticipated that Mullingar would exact revenge for that defeat considering they had already inflicted a 43 points to 15 defeat on Birr in an earlier round of the Midland League. Mullingar’s confidence was also boosted by their performance in the recent Osprey Challenge competition held in Wales where they finished runners up after two days competition.

This final kicked off before a large crowd who had travelled in anticipation of another great final tussle between these two fine sides. It was Birr, minus the injured Colin Kelly, who were out of the blocks and took an early grip of the proceedings. The Birr forwards, despite conceding height advantage, tore into the Mullingar pack and were making huge territorial gains with a combination of pick and go plays and one out runners. The Birr hooker Brody Larkin was devastating in loose play and time and time again broke the Mullingar defensive line with strong ball carries. He was ably assisted by the Birr back row trio of Cathal King, Patrick Bergin and captain Paddy McGuickan who carried on from where they had left off in the Leinster final. It was no surprise with 8 minutes on the clock when Larkin crashed over for a try following a series of pick and go plays close to the Mullingar line. The conversion from out wide was not converted but crucially Birr had drawn first blood and looked well up for the challenge. From the resultant drop off Birr were immediately back on the offensive with second rows Simon Feehan and Danny Walshe and props Gearoid Dooley and Aran Corcoran featuring prominently with some big carries. Having made 30 odd metres Birr knocked on and Mullingar were awarded a relieving scrum. However the relief was short lived as Birr continued with their high tempo start and were putting huge pressure on both the Mullingar backs and forwards. A feature of the game was the ferocity of the Birr tackling and the number of times they robbed Mullingar of possession at breakdowns. The Birr backs, not to be outdone by their forwards, were now imposing themselves on the game and the two Birr centres Darragh Guinan and Darragh McNamara were cutting the Mullingar midfield to shreds. There were danger bells going off in the Mullingar defence every time Guinan was on the ball as time and time again he beat two and three defenders with his strong running. It was no surprise when on 15 minutes slick handling by the Birr backs allowed winger Daire Temple finish off a great unconverted try wide out on the left.

Again from the kickoff Birr were on the offensive and the beleaguered Mullingar defence was falling off tackles as the Birr backs and forwards continually got in behind the Mullingar defence. Birr were spreading the ball wide with scrum half Eoin Burke and out half Ben Miller masterminding attack after attack with some brilliant flat line and decoy passing. Both Birr wingers Daire Temple and Cian Nolan were getting plenty of go forward ball and it was only some brave last ditch Mullingar tackling denying further Birr tries. However the constant Birr onslaught paid further dividends with 19 minutes on the clock when after some good approach work by the forwards, the Birr backs broke down the left side with impressive fullback Darragh Tierney drawing in the last Mullingar defender and putting Daire Temple in for his second try which was unconverted. Mullingar’s plight was further increased when shortly afterwards their hooker was yellow carded following a dangerous tackle. Birr took immediate advantage of their numerical advantage in the forwards with open side wing forward Cathal King on hand to dot down Birr’s fourth try of the half after a series of pick and go plays.

Having dictated first half proceedings in terms of possession, territory and tries scored it was a case of ensuring that Mullingar were not given an opportunity to make early inroads into that Birr lead going into that second half. This was the message delivered by Birr coaches Regan, Purcell and Walsh during the half-time interval. Unfortunately their worst fears were realised when straight from the kick off the Birr forwards on receipt of the ball knocked it on. From the resultant scrum Mullingar attacked right and wide. They were stopped but recycled the ball quickly and attacked Birr on the left. Two missed tackles later and Mullingar were over for a try which they didn’t convert...........game on! The next ten minutes or so would be crucial in terms of whether Mullingar could build on their great start to the second half or whether Birr would take control and take the sting out of the Mullingar resurgence. The answer was an emphatic Birr offensive straight from the kick off as they once again took control of this game and penned Mullingar deep in their own half. The introduction of Rian Carroll into the Birr front row gave the forwards a fresh pair of legs and they picked up their first half tempo again. To Mullingar’s credit their tackling improved from the first half but they still found it difficult to cope with the Birr forwards power plays and the imposing Guinan and his fellow backs were proving a handful for the Mullingar defence.

Finally Birr got the all important break-through with ten minutes to go, when awarded a line out on the Mullingar 22. In a move straight off the training pitch which the Irish coach Joe Schmidt would be proud of, an audacious switch pass by hooker Brody Larkin to open side Cathal King put King down the blindside and he cantered in from the 22 to score a brilliant try which Darragh McNamara slotted over for the extra points. With a 27 points to 5 score line in favour of Birr it was now time to send on fresh legs as it was evident that the some of the forwards and backs were beginning to tire and it was no surprise as they had given their all up to now. It was great to see the hard working props Shane Maher and Keith Maher and second row Ronan Minnock come on and anchor the scrum. In addition it was a welcome return for open side and long serving Peter King and young Sean Murphy at blind side. In the backline it was a return for semi-final try scorer Cathal Robinson and the elusive winger Ailbe Watkins who made an immediate impact when introduced. With time ticking away Mullingar managed to cross the Birr line twice but it was academic as time was virtually up and served only to put respectability on the final score line. 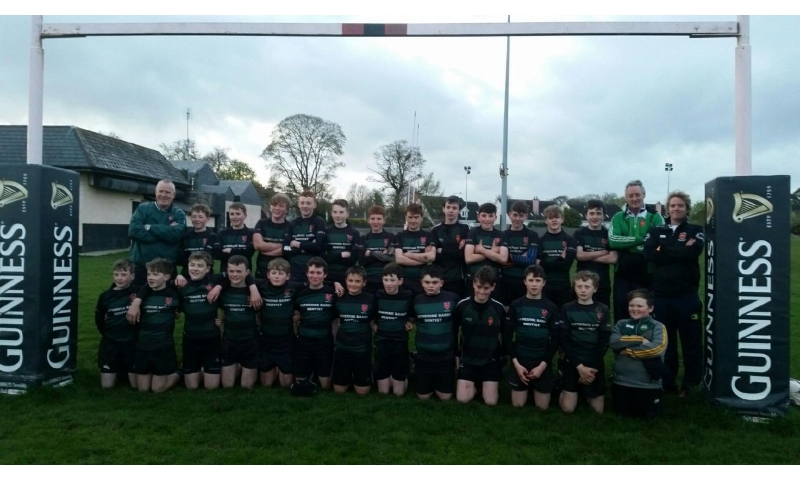