In glorious sunshine on Saturday last the Birr U14 boys were victorious in the Leinster League Division 2 Final when they overcame the much fancied home side Mullingar in a thrilling encounter.

Having conceded neutral venue to Mullingar it was going to be a huge task for the Birr boys considering Birr had drawn at home and lost away when the sides met earlier in the league stages. Birr had also suffered a substantial loss away to Mullingar in the Midland League in January so the odds on a Birr victory looked pretty long on the day.

The odds grew longer when two minutes into the game Mullingar scored an early try when the Birr defense got itself in a tangle in their own 22 and spilled the ball. Mullingar were quicker to react and scored in the corner. The conversion was narrowly wide but crucially Mullingar had scored the first try which would be a decider if the game finished level as Leinster Youth Finals are not subject to extra time. The Birr response was immediate and straight from the kick off they went after Mullingar with a vengeance. What followed was some wonderful combined rugby from both the Birr backs and forwards as they made telling inroads in the Mullingar defense. The front five forwards, particularly Brody Larkin, Aran Corcoran and Danny Hughes made some big carries and the back row trio of Cathal King, Patrick King and captain Paddy McGuickan were savage in their work at the breakdowns. The Birr scrum half Eoin Burke was firing out rapid passes to out half Ben Miller who was orchestrating the Birr backline to great effect. This constant pressure finally told on the Mullingar defense and following good approach work from the forwards out left on the Mullingar 22 the Birr backs attacked right and straight running and quick hands from centers Darragh Guinan and Darragh McNamara put fullback Darragh Tierney in for a great team try. Darragh McNamara coolly slotted the conversion and Birr were ahead with 12 minutes on the clock.

At this stage Birr had the upper hand and continued to pressurize Mullingar who were finding the Birr continuity play hard to cope with and it was somewhat against the run of play when Mullingar broke from their own 10 meter line and scored under the post for a seven pointer albeit aided by some poor Birr tackling. The concession of this score could be a game breaker for Birr but to their credit they upped the intensity and immediately went after Mullingar. The Birr full back Darragh Tierney was having a blinder and was a constant threat to Mullingar with his broken field running. The two Birr wingers Daire Temple and Ailbe Watkins were seeing lots of ball and were now a constant threat. Good approach work again from backs and forwards brought Birr into the Mullingar 22 and after a prolonged period of pick and go drives from the pack Aran Corcoran crashed over for a try. The conversion was narrowly wide but Birr were now back on level terms with 7 minutes to go to half time. The next 5 minutes proved crucial in terms of the overall result as Mullingar were camped on the Birr 5 meter mark but heroic defending from Rian Carroll, Simon Feehan and the back row kept Mullingar at bay. In fact Birr lifted the siege, broke down field and after a clever wrap around play from Ben Miller put Ailbe Watkins on a run for the left corner it was only a last ditch tackle from the Mullingar winger saved a certain try.

The second half would prove to be a nail biting affair. Both sides knew that whoever scored first would probably kick on and win this final. Birr were aware that if the game remained all square that they would lose out on a try count back with that concession of that first try proving fatal. Straight from the kick off a Mullingar forward jumped high, secured possession and hit the ground running. He made it as far as the Birr 22 before being tackled to the ground. Birr managed to avert the danger and clear the ball to touch. The next 15 minutes was fought out between the opposing 10 meter lines with both sides probing and looking to breach the opposition defense. It became apparent that whatever side could cross their opposing 22 might just get the upper hand and get that vital winning score. The Birr pack were visibly getting stronger as the minutes counted down with Corcoran, King, Bergin and McGuickan very prominent. Also the Birr backs were now causing Mullingar some serious problems out wide and there were visible cracks appearing in the Mullingar wide defense. With 10 minutes remaining Cian Nolan came on as a replacement for Daire Temple who had put in a tremendous shift on the wing. Finally a breakthrough and it went the way of Birr. After constant pressure just outside the Mullingar 22 the Birr backs broke inside the Mullingar 22 and following a series of pick and go drives from the pack, Birr found themselves inches from the Mullingar line. Heroic defense from Mullingar kept their line intact until they ran out of tacklers and Birr found space down the short side and quick hands put Cian Nolan over in the corner for a great try. Although the conversion went wide Birr now had their noses in front and their tails were up! Straight from the kick off Birr took possession and control of this match. They played heads up rugby and did not allow Mullingar any opportunity to get on the front foot. With 3 minutes to go on the clock Birr had a scrum on their own 10 meter line on the far right. A solid scrum and quick hands across the backline put Cian Nolan on a one to one with his opposite number. In true style and with the aid of a fantastic handoff Cian raced over in the corner for a Jacob Stockdale style try. That was it for Birr and when the whistle blew shortly afterwards there were jubilant scenes as the huge travelling support for Birr invaded the pitch to acclaim the new Leinster Champions! 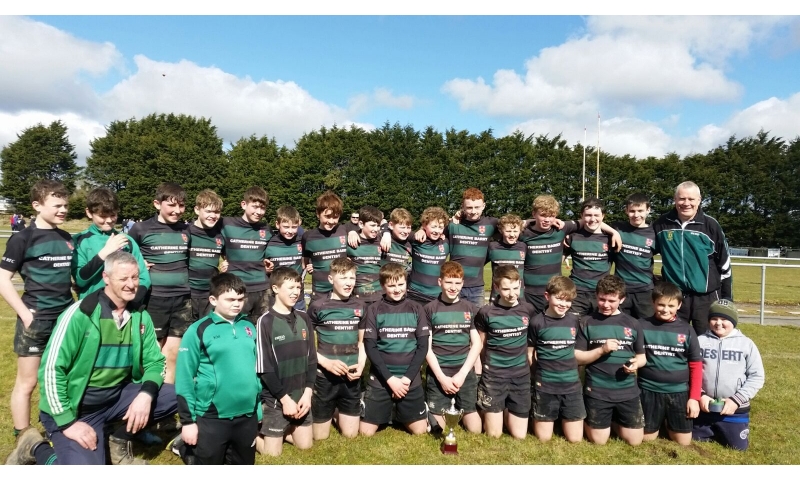 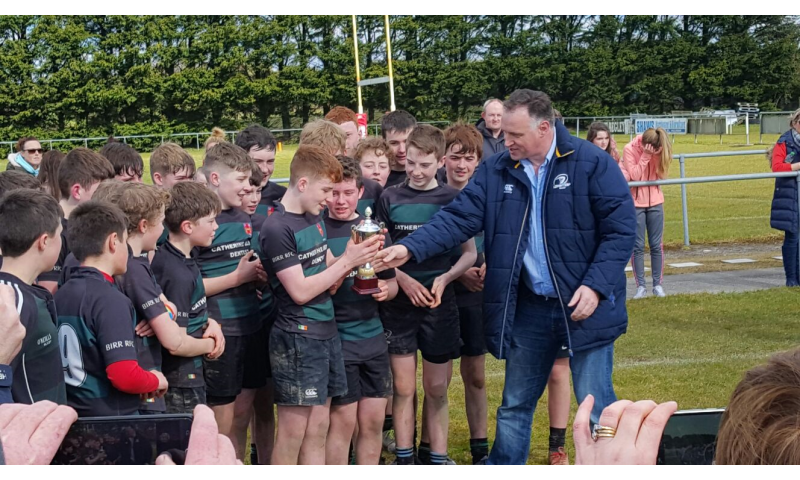 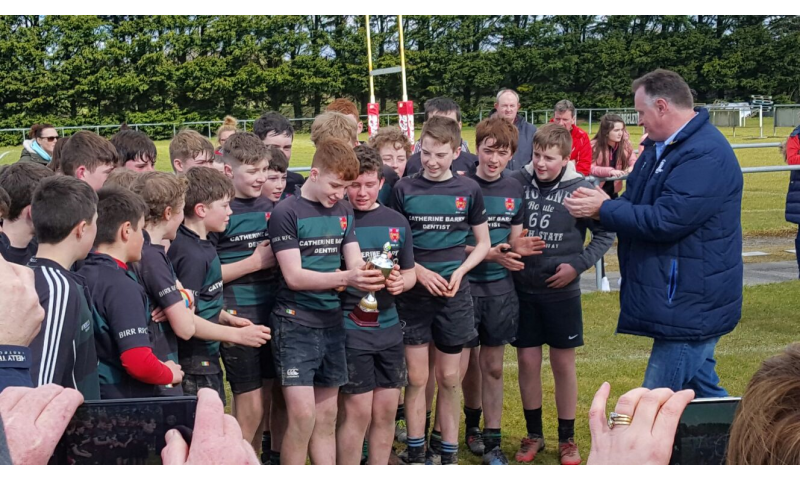 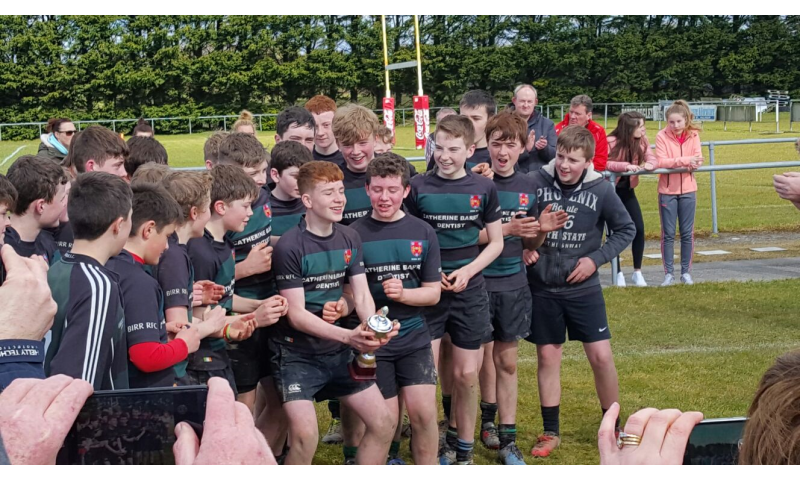 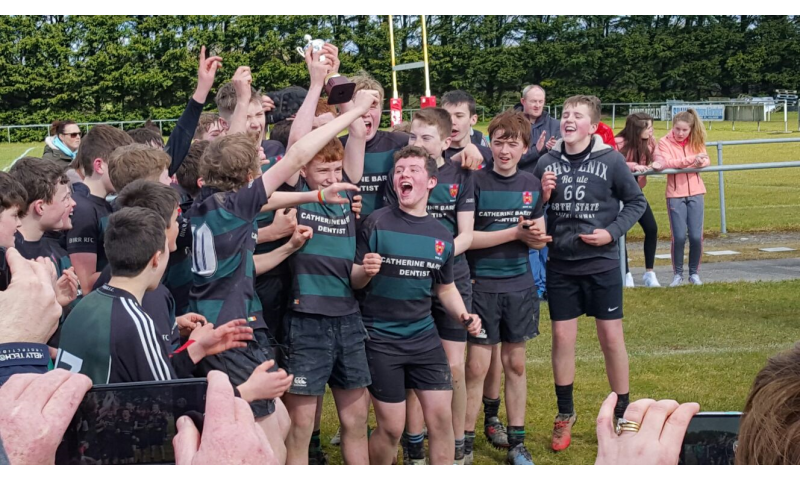 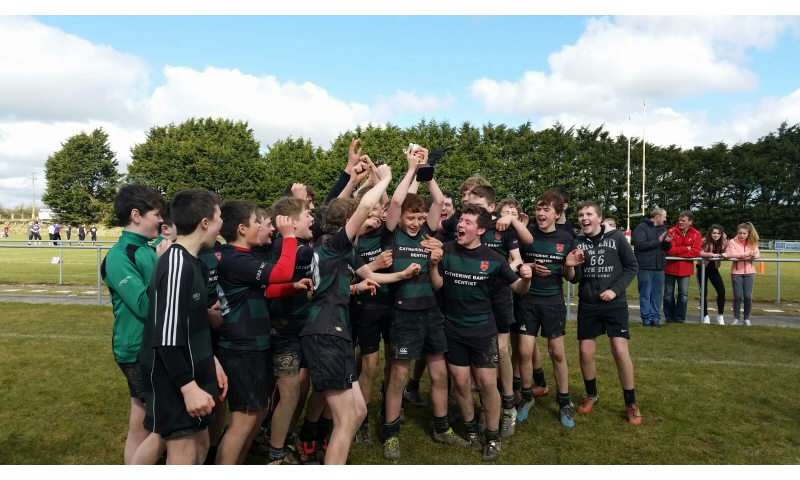 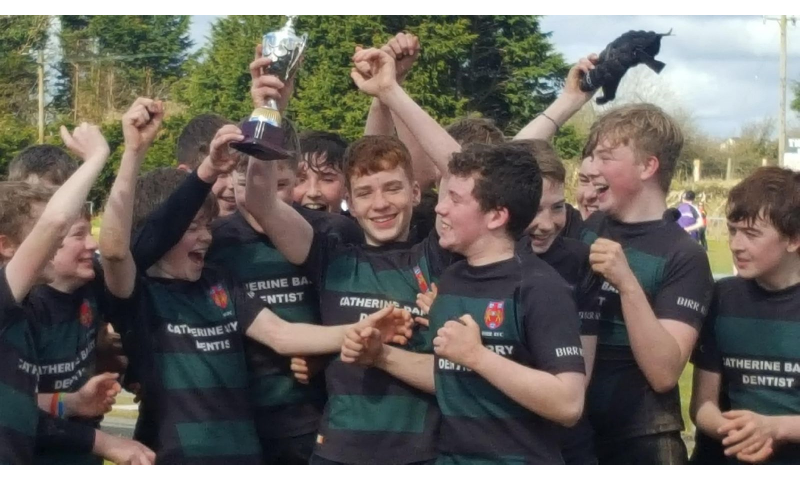 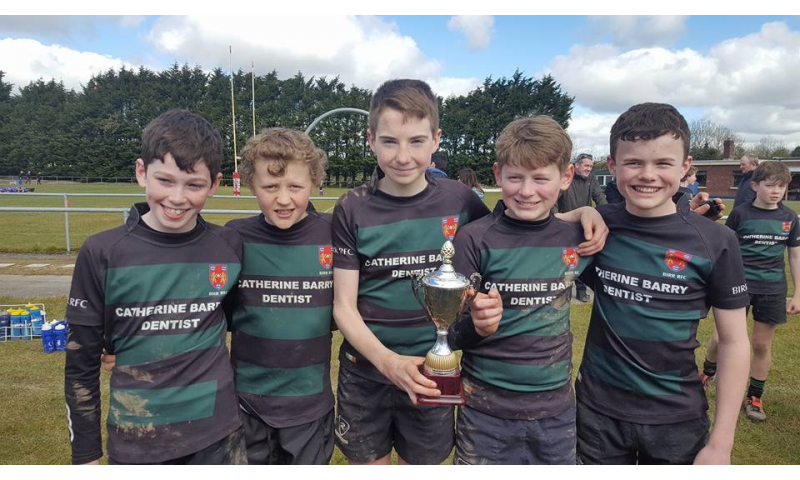 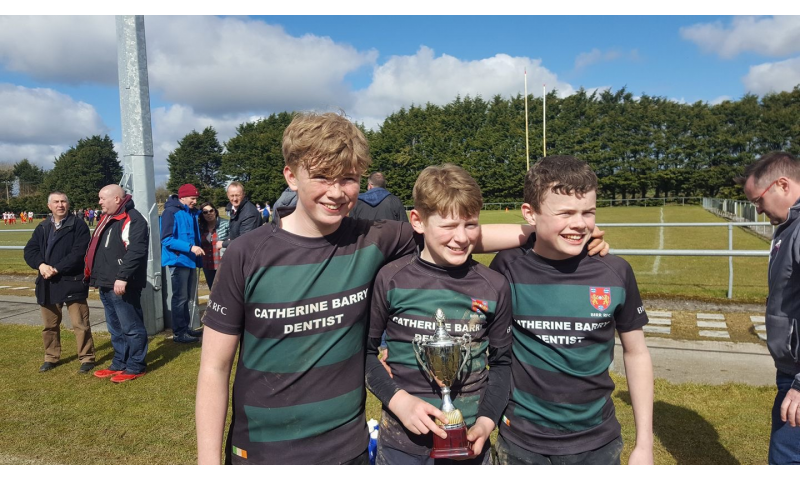 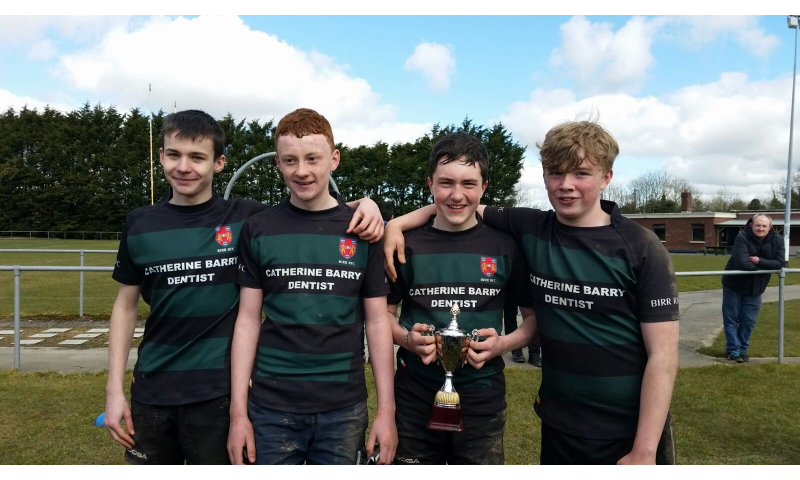 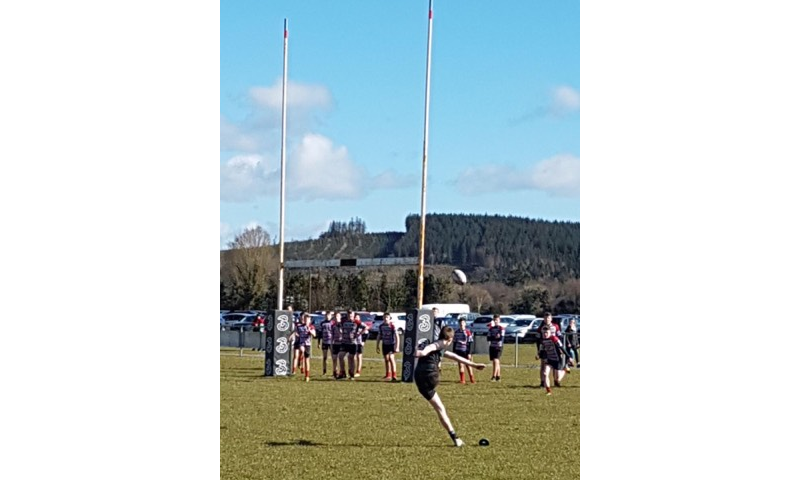 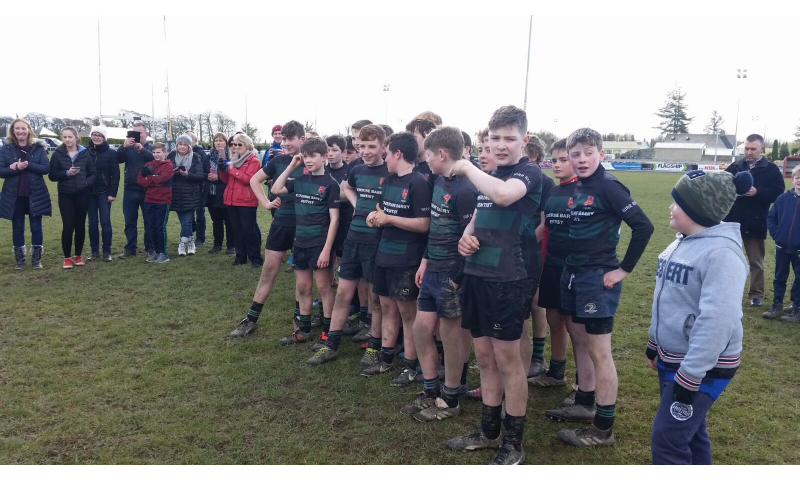 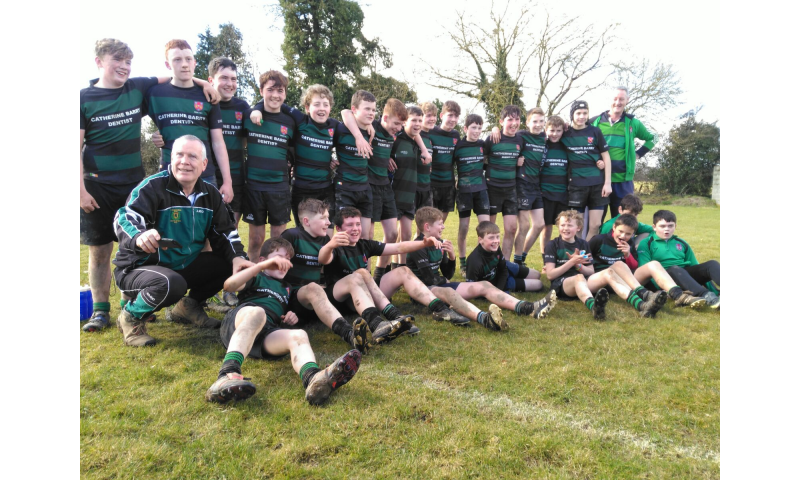 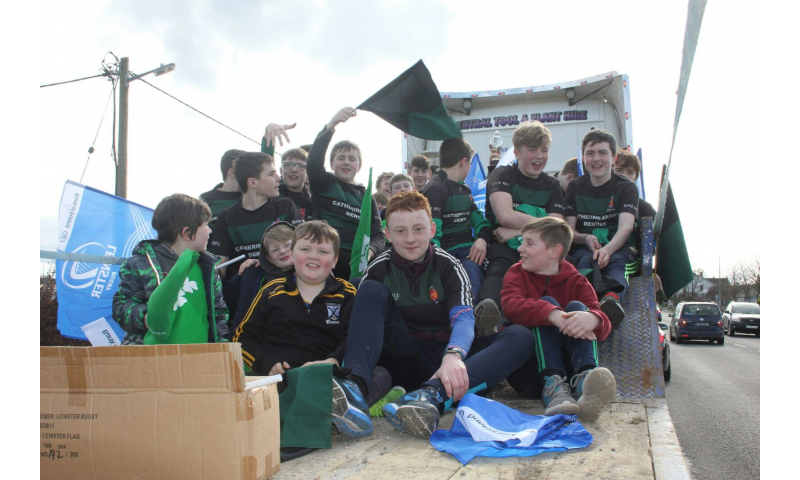 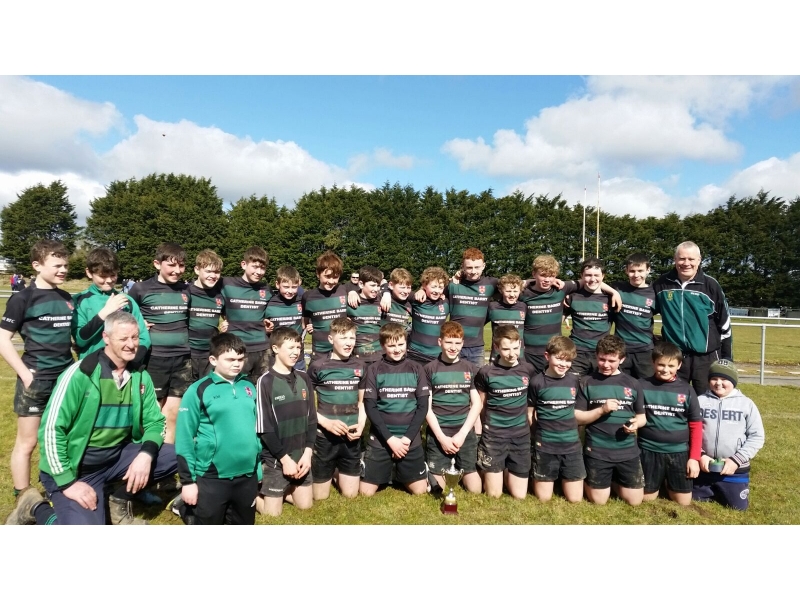 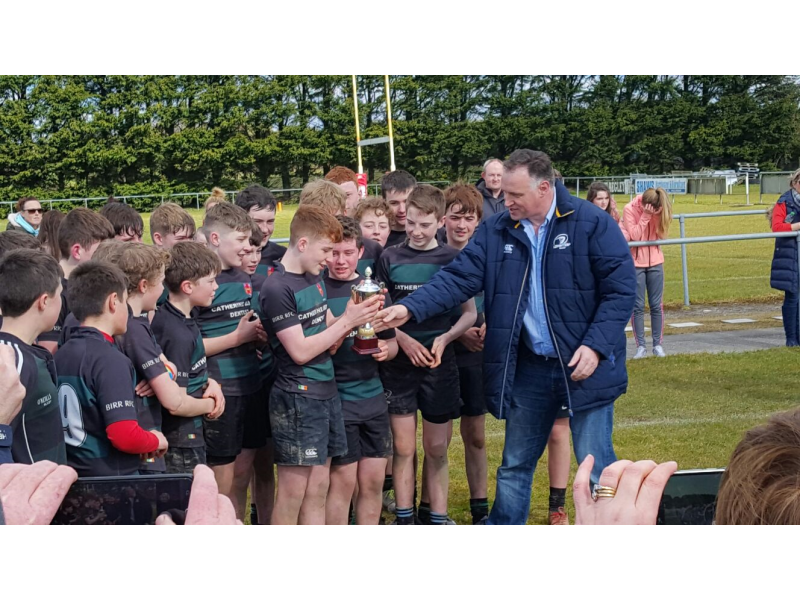 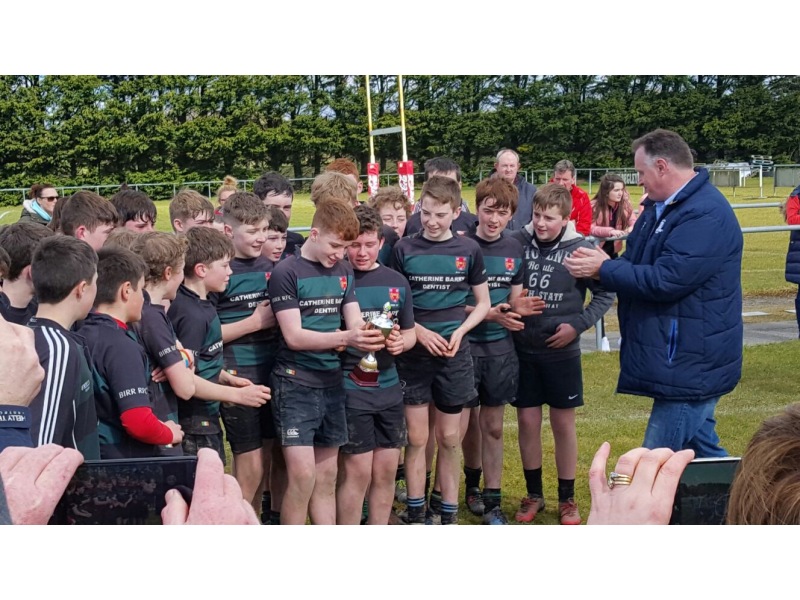 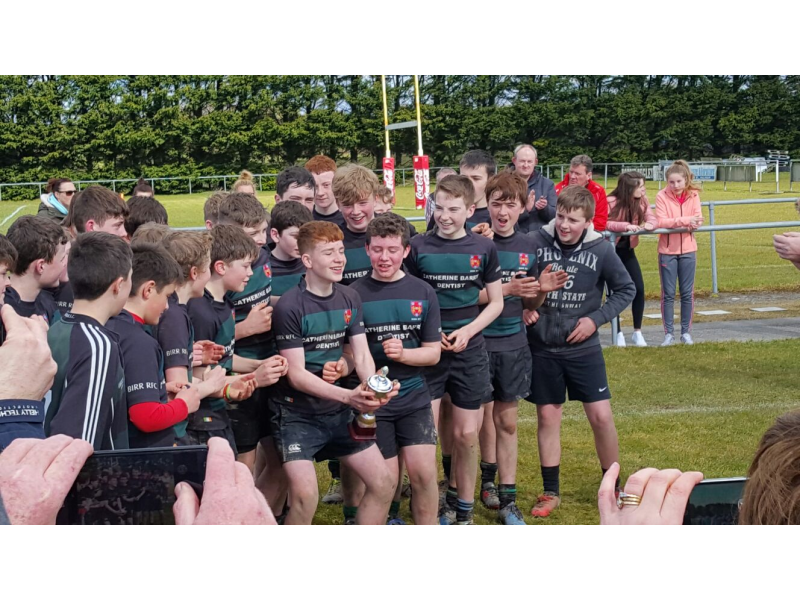 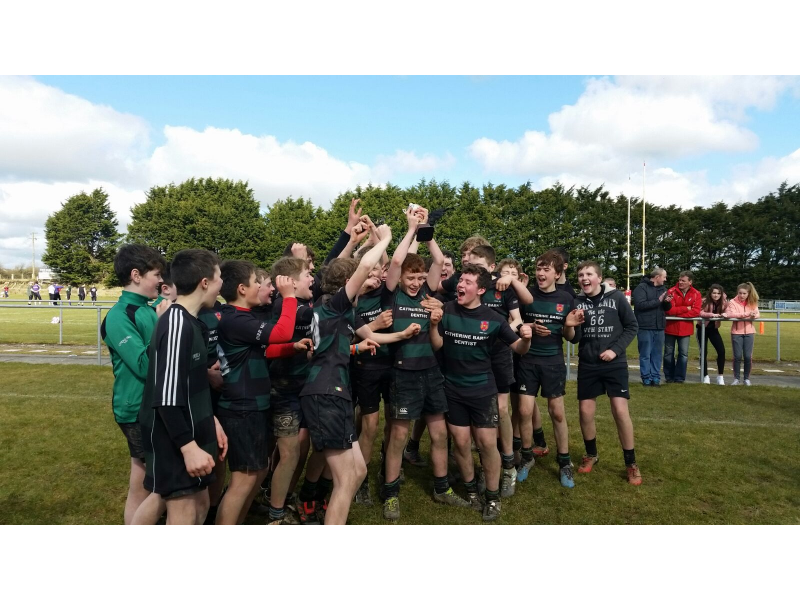 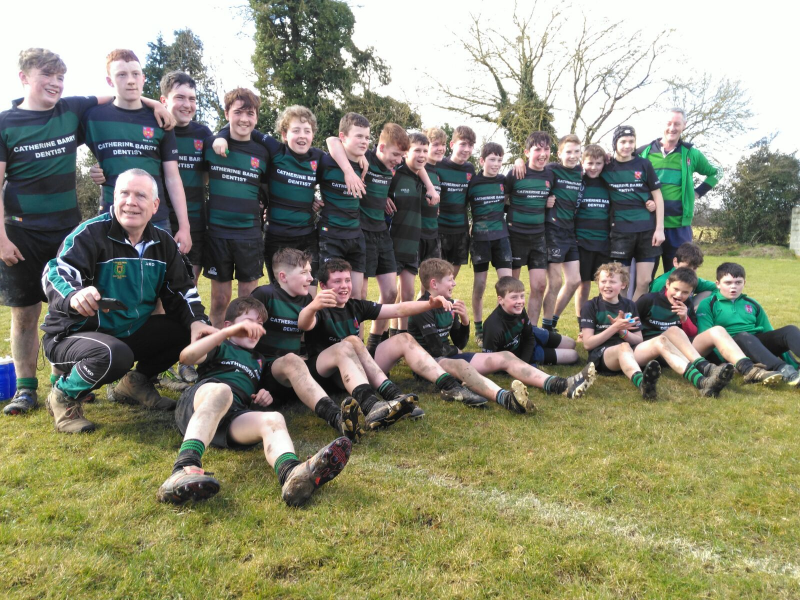 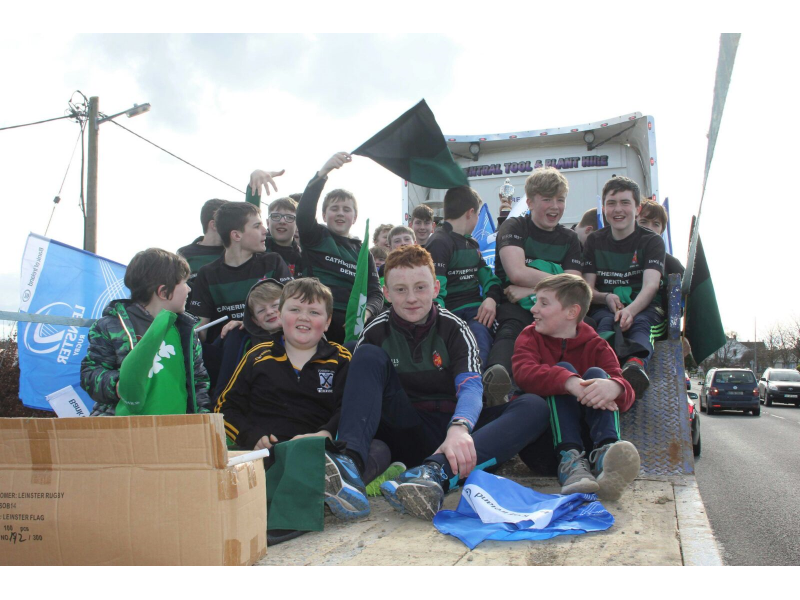