On Sunday 8th Birr RFC’s senior men, sponsered by the Swan Bar and Haslam Hedge Cutting, played there last Leinster League game of the season at home to Garda RFC. Christy Hogan’s men came out strong moving the ball around and punching holes into the Garda defence with strong carries from both the forwards and the backs. It wasn’t long before Eoin Gannon went through a gap on the half way line to score Birr’s first ty of the match which was converted by Brendan Heffernan. Score 7 – 0 to the home side.

The next 20 minutes of the match saw both teams putting in strong defences in the soft conditions until a number of strong carries from Garda put them close to the line and over for their first try of the match which they converted. Score 7 – 7.

The second half kicked off playing with the wind and carrying the ball into the opposition to good effect to work their way up to the Garda try line. With a strong carry from Mick O’Dwyer and a quick recycle hooker Sean Kay smashed over the line to score Birr’s second try of the match. Score 14 – 7.

Garda weren’t to be undone however and after 10 minutes of strong phases got back into the game with a try themselves bringing the score back to 14 – 12. Birr followed this up shortly after with Alan Guinan scoring in the corner for Birr. Score 19 – 12.

In the last play of the game, and a losing bonus point on the table, Garda were determined not to go out without a fight putting in big carries and working their way up the pitch. The Birr men put in a strong defence forcing Garda to attempt a grubber kick which was picked up by Birr winger Michael Keane. Egged on by his fellow players, and the sideline, he spotted a gap and ran 50 meters to scores Birr’s fourth try and secure the bonus point. Brendan Heffernan followed up with a fine drop kick to end the match 26 – 12 to Birr.

With the match over, and the other results coming in, Birr RFC Senior Men finished the season in third place with 8 wins and 6 losses. Out of the 6 losses they picked up 4 losing bonus points showing how competitive they were in another successful season. The team would like to thank everyone who helped out or came down to watch the match. Congratulations to head coach Christy Hogan and all 31 senior players involved in the squad this year on the finish in the league.

While the league might be over our Senior Men kick of the Provincial Towns (J2) Cup run away to Carlow this Friday 13th March at 7.45pm All support is welcome.

Man Of The Match: Paul Donohoe 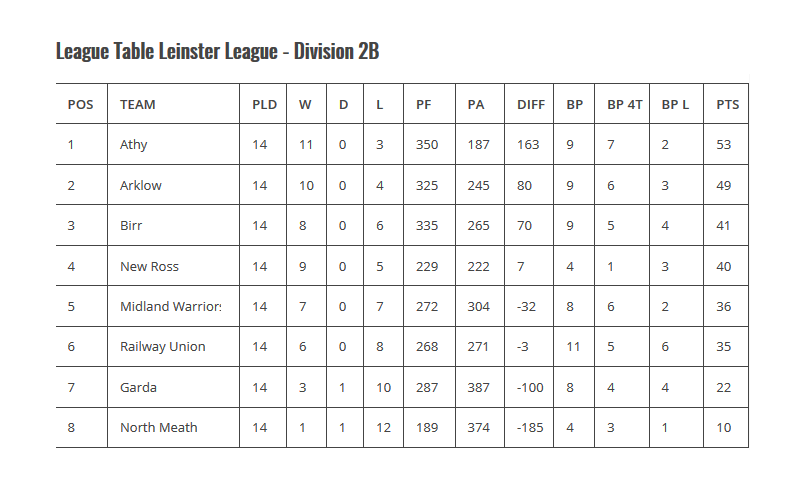 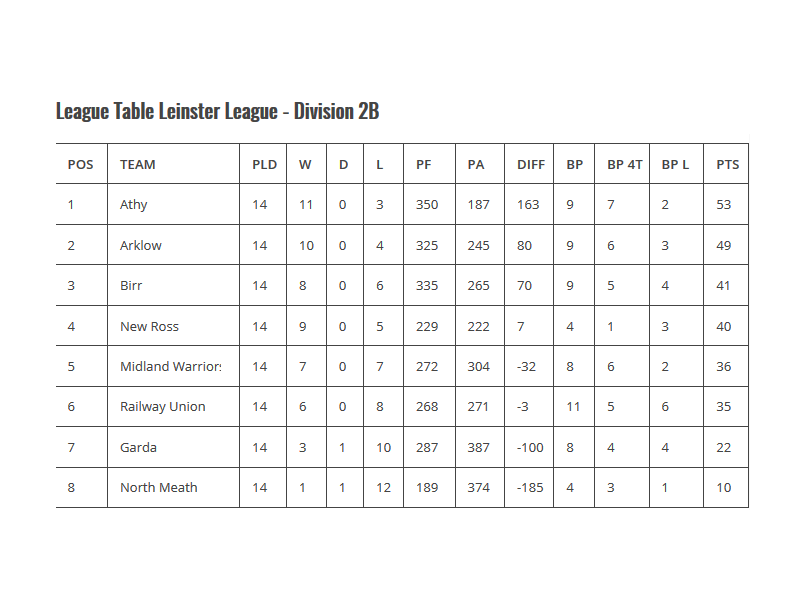